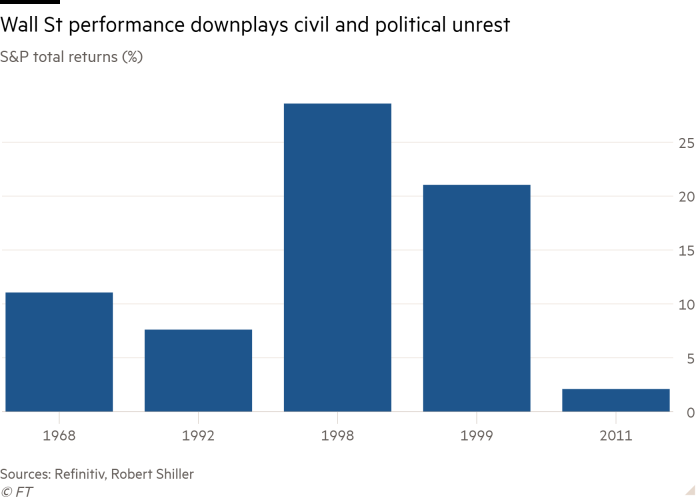 Financial markets have a history of looking through bouts of civil and political unrest. Today, investors are focused on the reopening of economic activity in the US, rather than the turmoil engulfing many American cities since last week’s killing of George Floyd, an unarmed black man, in police custody.

Investors can point to history to justify their calm. At the end of a bloody 1968, the S&P 500 finished nearly 11 per cent higher on the year, including the reinvestment of dividends, despite the assassinations of Martin Luther King and Robert F Kennedy, actions that triggered civil and political turmoil. The S&P also finished 1992 in positive territory after riots following the acquittal of Los Angeles police officers who had beaten Rodney King, another black man.

Towards the end of the last century, the impeachment trial of President Bill Clinton was accompanied by the S&P 500 rallying more than 20 per cent in both 1998 and 1999. More recently, the Occupy Wall Street protest that started in Manhattan’s Zuccotti Park in late 2011 was accompanied by a 4.5 per cent climb in the S&P 500.

These examples illustrate how equity prices reflect a focus on the underlying economic and corporate earnings narrative at the time, rather than societal or political upheaval.

“History shows markets look through many sorts of tumultuous events and have done so for decades,” says Nicholas Colas at DataTrek Research, which provided the annual S&P figures. “That may seem counter-intuitive, and perhaps not even fair, but it’s absolutely true.”

Wall Street’s confidence in an approaching economic recovery this year, vindicating a sharp rebound in asset prices from their lows in March, suggests that the worst of the Covid-19 shock is behind us. Market sentiment is tied up with long-term expectations for growth and, in spite of skyrocketing unemployment and intense pressure facing small businesses, investors are intent on getting ahead of an expected new business cycle. Hence a stock market that has rebounded by a third in value since late March, leaving the S&P 500 within 10 per cent of its February peak, despite cumulative US jobless claims filings exceeding 40M.